The lives of hundreds of millions of people are devastated by diabetes across the globe. Unfortunately, someone dies every seven seconds because of diabetes or one of its complications. Specifically, type 2 diabetes, most common in obese people, is characterized by high glucose levels in the blood due to impaired insulin response by the body’s cells and/or insulin shortage. Insulin is an important hormone that signals to cells to take up circulating glucose from the blood for energy generation for their survival and function. However, in type 2 diabetes, glucose lingers in the blood and, subsequently, the peripheral nervous system of the legs becomes badly affected, leading to loss of pain, sensation, and touch.

So, when a diabetic person has an injury on his or her foot, following some physical trauma, it is likely to go unnoticed because of the lack of sensation. Hence, diabetic foot ulcers (DFUs) are likely to develop in 15-25% of the diabetic population.

DFUs are hard-to-heal wounds that occur below the ankle. These wounds are prone to infection, which subsequently leads to non-traumatic limb amputation. Following amputation, 50% of people die within a five-year period. These alarming global health statistics make me very passionate about driving change as a scientist!

Health and socio-economic costs of DFU management are constantly rising, and therefore we need effective DFU therapies. However, animal studies targeted at testing developed DFU therapies for human use add little value – this is because 90% of therapies that heal ulcers in animal models do not work in humans. This boils down to the fact that animals and humans are just too different.

Moreover, the application of the 3R’s (i.e. Refine, Reduce, Replace) in research is strongly encouraged in bid of eliminating the use of animals for experiments, as they are subjected to distress and death, apart from high maintenance costs. On the other hand, in vitro DFU models to date are not robust enough to have convincing findings that aid transferring knowledge to clinic trials.

Therefore, a research field focused on developing robust in vitro DFU models for testing new drugs is emerging, which will help accelerating most effective therapeutics to the clinic.

Perhaps you have guessed that recreating diseased conditions in vitro is quite complex. It is therefore important to understand the defining points in the disease, the key players and how best to put them into action outside of the body.

In DFU, inflammation is one of the factors known to prevent healing. Inflammation, carried out by immune cells, is the body’s normal response to remove bacteria and dying cells from the wound site. Many existing models fail to capture the inflammation process and therefore are not suitable for drug testing. Secondly, in general, current chronic wound models do not behave reproducibly. Therefore, in the near future, scientists need to be able to produce scalable wound models.

More exciting is the possibility of using a patient’s cells to develop a minimally physiologically relevant in vitro DFU model and test multiple therapies at once to see which of them works best for that patient in a cost-effective way!

Therefore, I plan on developing a scalable non-animal in vitro DFU model, that can be used for testing new or existing therapies targeted at resolving inflammation and, hence, promoting wound healing (figure 1). The primary factors needed will be the right microenvironment and key cell types. 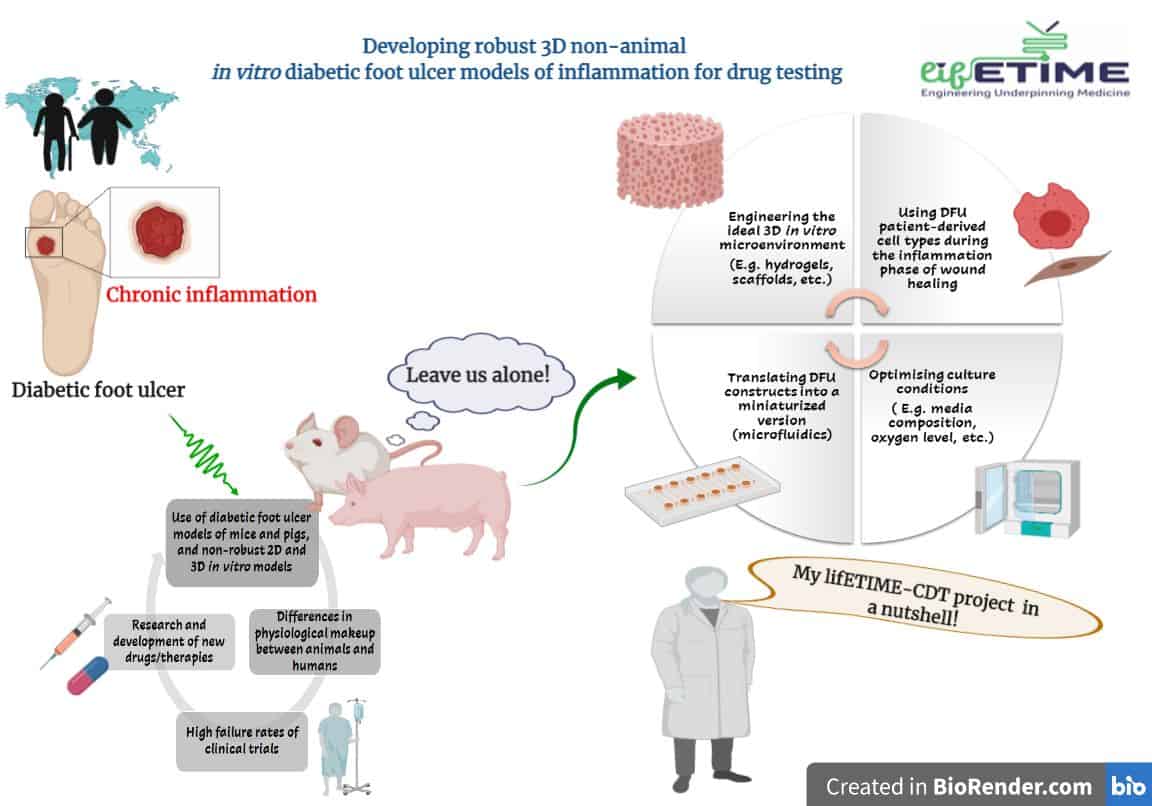 In this project, I will explore how to engineer the cellular microenvironment to mimic an “inflamed” diabetic condition. Inflammation in DFU determines whether the wound heals or not (based on the literature). So, which immune cells should be included, and how, along with the typical keratinocytes and fibroblasts?  This is another principal aspect of my project. Finally, miniaturizing the in vitro DFU model into a microfluidic chip will be explored to understand how blood-flow dynamics contribute to wound healing.

Exciting times are ahead as the scientific community seeks to develop disruptive DFU healing technologies/therapies, along with reliable non-animal in vitro DFU testing platforms that can speed up most effective therapies to individuals with DFU.