What is adrenocortical carcinoma or ACC? Is it possible to have cancer in the adrenal glands? Who gets that? I never heard of that before! These are a few of the questions that might cross your mind when you read the title of this text.

ACC is a rare endocrine (hormonal)cancer with a poor prognosis that affects the adrenal glands which sit over the kidneys. It is also considered an orphan disease. What is an orphan disease? According to the FDA: “An orphan disease is defined as a condition that affects fewer than 200,000 people nationwide in the U.S at any one time”. Annually there are 0.7-2.0 new cases of ACC per million population. It is diagnosed most commonly in people between the ages of 40 and 50 years old. Females are affected more commonly than males. However, age is not necessarily a risk factor for this disease. In fact, ACC accounts for 0.05-0.2% of paediatric tumours, and this is more commonly found in Brazilian children with a mutation in the TP53 gene.

As if having cancer was not enough, 40-60% of cases manifest a hormonal overproduction (or endocrinopathy) known as Cushing syndrome. Despite the tumours being large and associated with endocrinopathy, the associated clinical signs are often subtle and 30% of cases are asymptomatic. It is not surprising that 20-30% of the cases are diagnosed as adrenal incidentalomas or an incidental finding on abdominal imaging carried out for another reason. Now, to make it more dramatic, the only effective therapeutic option is mitotane which is derived from an insecticide, which has been used since 1959. The mechanism of action in human adrenocortical cells is not entirely clear. However, this drug has several unwanted secondary effects, limited efficacy in metastatic disease and a narrow therapeutic range. Therefore, we need to find new therapeutic strategies and take care of patients with recurrent, advanced or metastatic disease. 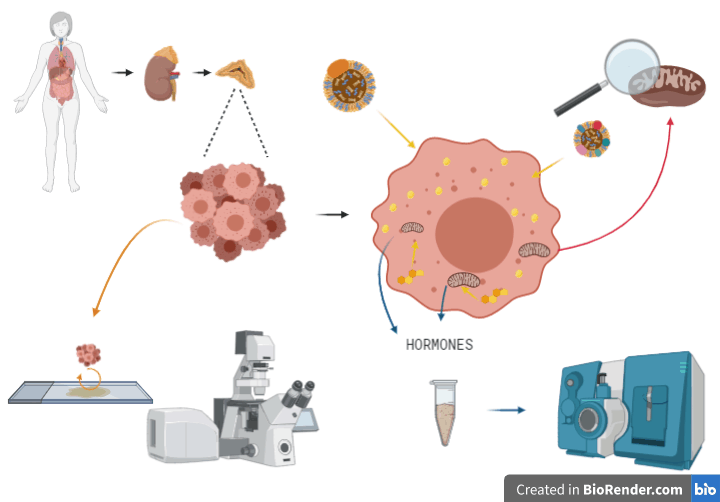 The main limitation of studying this cancer type is the limited access to human samples, together with the lack of representative cell lines, and the absence of a reliable small animal model of disease. This has significantly challenged the study of this neoplasm for a long time. Additionally, it is difficult to successfully culture the ACC primary tumour cells for periods enough to carry out truly mechanistic studies in the lab. However, with new advances in tissue engineering techniques and biomaterials, we intend to reproduce an ACC tumour by culturing in 3D using collagen-I biomaterial and co-culturing with macrophages. Also, previous research within this field has informed us of several mutated genes such as Steroidogenic factor 1 or SF1. SF-1 is a nuclear receptor that belongs to the NR5A of orphan receptors which binds nuclear DNA. It is involved in adrenal and gonadal development, sexual determination, reproduction, and steroidogenesis. However, several other genes are mutated, and more detailed mechanistic studies are required to determine their effects on ACC tumour recurrence, metastasis and response to therapy.

Using a 3D model, we will study the growth, metastasis and steroidogenic processes of ACC using different inducers and inhibitors. We will determine how lipids, cholesterol and hormone production determine the underlying disease process of progressive ACC. We will measure steroid production, using HPLC- tandem mass spectrometry to quantify metabolites in media harvested following the culture of ACC cell lines. In parallel, we want to know why and how ACC cells leave their tumours and metastasise to other tissues, such as the liver and the lungs. One explanation is that   mitochondria and the way that they use energy play an essential role in this process, and we aim to take a more in-depth look at it. We will film mitochondria and how they accumulate within ACC cells which are leaving the 3D culture environment, somewhat like a movie using time-lapse microscopy. By observing how these cells move and behave on different surfaces of different surfaces, we expect to learn about the underlying principles of the metastatic process of these cells.  Looking at the big picture of ACC cells, they are like versatile killing machines, full of lipids cholesterol and powerhouses of hormonal production that we struggle to understand. Thus, we have a lot of work to do. 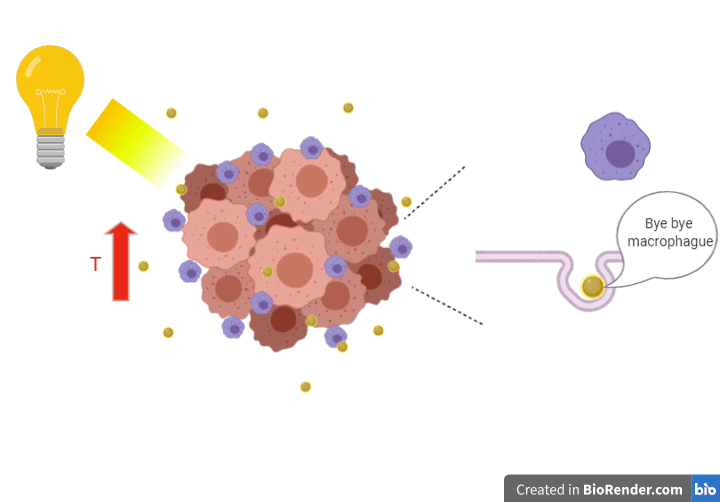 Last but not least, we must put translational strategies in place to help those patients affected by ACC. However, it is a long path to get there, and while the realistic chances of success are challenging, the information we will gain along the way will be important for understanding the disease better and informing therapeutic strategy. Our proposal is to use heat and light-sensitive nanoparticles to deliver hyperthermia to the ACC cells. We want to use hit cancer cells with a high temperature to kill them using a cleaner treatment. We will engineer coated nanoparticles to bypass macrophages, skipping phagocytosis to reach ACC tumour cells. Making use light or other radiation on the nanoparticles, we expect to increase the temperature in the area, killing cancer cells. We propose to develop and test this strategy using an ‘Organ-on-a-Chip’ system.

Taken altogether, this project comprises my drive and passion for pursuing a PhD for four years. I find it essential to do something for adrenocortical carcinoma patients and improve their quality of life. They are human beings that do not deserve to be treated as an only number of cases inside of a group called orphan diseases.