TBI? More like TB-EYE! – Brain Injury Diagnostics that don’t cause a Headache!

We’ve all heard that eyes are windows to the soul, but could they be literal windows to the mind, allowing us to determine if a head injury has been sustained?

You may associate Traumatic Brain Injury (TBI) with military service members and American football players but sixty-nine million people are estimated to suffer from a TBI worldwide per year [Dewan 2018] and they are most commonly sustained through vehicle accidents, falls and assaults. A TBI is sustained when there’s damage to the brain due to impact to the skull. It can be categorised as mild, moderate or severe, with symptoms ranging from dizziness, unconsciousness, cognitive issues and, sadly for many, death [Prins 2013].

Despite the prevalence of TBI, existing diagnostics and treatments aren’t very successful, as even those who sustain a mild TBI can have long-term repercussions. One thing that’s been noticed is that early treatment is crucial to give patients the best possible outcome, and treatment can only be implemented once a diagnosis has been made; so vital time is lost transporting a TBI patients from the point-of-injury to hospital.

Current TBI diagnostic techniques include: categorising patients by assessing their consciousness (Glasgow Coma Scale), neuroimaging (CT & MRI scans) and measuring the biological response in the brain or blood [National Academies of Sciences 2019]. Whilst these methods are accessible and relatively fast, there are a number of shortfalls that can affect a TBI patient’s outcome.

Some of these shortfalls include:

These limitations lead to vital time being lost and incorrect diagnostics. Because of the limitations, many clinicians use 2 or more techniques before diagnosing the patient. From this evaluation, I and my group see an unmet, urgent need for a diagnostic technique that can be portable, implemented at the point of injury quickly and can detect all TBI types. This is where we introduce a spectroscopic technique known as Raman Spectroscopy.

Light can be thought of as particles or photons, which are packets of energy (thanks quantum mechanics). Raman Spectroscopy scatters a laser from a sample which vibrates its molecular bonds (Larkin 2011), “using up” some photon energy.  These scattered photons will have different energies from the original laser, and can then be detected and used to create a spectrum which paints a picture of what molecular bonds are in the sample: a fingerprint of the sample’s chemical structure. A loose analogy for Raman spectroscopy is shown in Figure 1 featuring examples of Raman spectra; the spectra for a vanilla cake and a chocolate cake are identical apart from a large peak on the right hand side of the chocolate cake spectrum; this is the peak representing the molecular bonds forming cocoa powder. 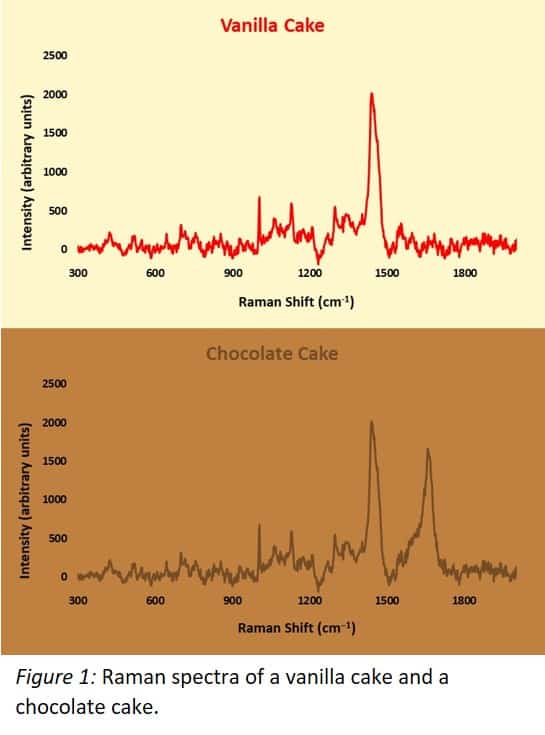 Raman spectroscopy is a sensitive and specific technique which offers distinct advantages over other spectroscopic methods for sensing, including immediate detection of analytes without complex sample preparation. Raman is one of few detection techniques that can be deployed outside a laboratory setting rapidly and without a significant loss in performance.

My project focusses on developing a portable Raman Spectroscopy device that can be used at the point-of-care, in the acute early-stage period following head injury to determine the severity of the TBI. The eye, as it happens, is quite good at focusing light and is situated very close to the brain (shown in Figure 2). There are a number of biochemical changes that occur in the brain following TBI, and the device will (hopefully) be able to detect these changes in the retina too, with identified peaks and intensities corresponding to different TBI severities. 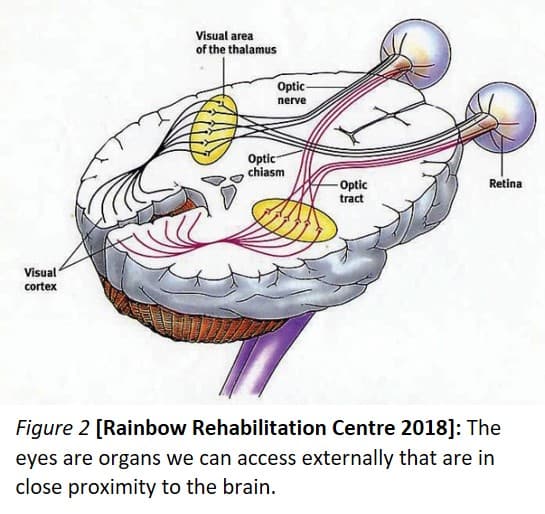 A challenge in this process is that Raman spectroscopy needs as much signal as it can get to give useful results and signals bounced off the back of an eye are at risk of getting lost along the way. Another challenge is that the system must adhere to safety regulations, and ensuring that the device doesn’t cause any damage is crucial.

Thinking positively, we envision that the success of this device would improve TBI diagnostics, allow patients to get appropriate treatment early, help better the understanding of brain injuries and maybe even open doors for better neurological disease diagnostics further down the line. But most importantly, such a technology will reduce the immense healthcare costs and save many lives!