My project revolves around studying a signalling pathway that previous research showed it is important for the directional metastasis (or spread) of aggressive cancers.  The signal in question is a lipid called lysophosphatidic acid (or LPA) that exists in the cells’ surroundings. The cells’ have a receptor that senses this signal, this receptor is a G-protein coupled receptor (GPCR) called LPAR that binds extracellular LPA.

Highly metastatic cancer cells, like the pancreatic ductal adenocarcinoma (PDAC) cells I am using, are very responsive to LPA. What that means is that these cells will begin to purposefully and directionally migrate towards an area with more LPA once they sense it through the LPAR.

There are many stages between the point that the cancer cells sense the LPA (when it binds LPAR) and the start of this purposeful migration. One of the very first steps is for the LPAR to activate large heterotrimeric G-proteins, as GPCRs do. The large G-proteins consist of 3 subunits: α, β and γ. When activated by the LPAR, these 3 subunits break apart.

If the G-protein “break-up” could be visualised, you could image LPA sensing in cancer cells in real time. In this case, one of the best ways to achieve this is by tagging two of the subunits with fluorescent probes and using Fluorescence Lifetime Imaging Microscopy (FLIM) coupled with FRET (fluorescence resonance energy transfer).

FRET is a very commonly used approach that a lot of people are very familiar with. In case you are not, I would direct you to an excellent blog post by Dr. Alessandro Esposito that explains FRET in plain terms for anyone with no scientific background. FRET is typically measured through fluorophore intensity. However, with FLIM you measure FRET only through the donor’s fluorescence lifetime.

Incredibly precise detectors in FLIM microscopes quantify the donor’s lifetime with nanosecond accuracy by, quite literally, counting photons emitted after the excitation of the fluorophore with a very quick laser pulse. When there is FRET, the donor’s lifetime will be short as the acceptor will absorb some of the emitted photons, and the sensitive detectors can tell the difference!

Another important capability of FLIM is that given the right hardware, apart from 2D systems, it allows imaging of 3D biological models like spheroids and organoids (Figures 1, 2). Thus, FLIM can be a very robust approach to quantitatively measure FRET that does away with many shortcomings intensity-based methods are associated with. 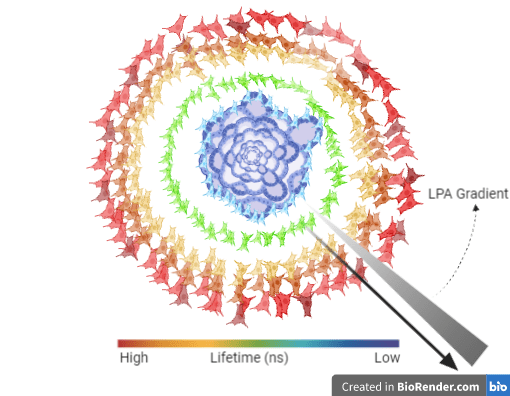 The importance of learning more about LPA-induced migration lies in the possibility to uncover “druggable” components of the signalling pathway with the aim of impairing metastasis. Especially in the context of PDAC, such targets could be immensely useful as it is a very lethal type of cancer with only ~20% of patients surviving a year or more – a percentage that unfortunately has not changed much since the 1970’s.