I am a chemical engineer whose ambition is to play a key role in human being life. Though it seems there is no specific role of chemical engineering in health care, its combination with other engineering streams such as biomedical engineering and biotechnology has introduced an interdisciplinary field, called tissue engineering, which enables us to apply various disciplines of life sciences and engineering to protect, improve, restore or replace biological tissues. In this stage of my academic journey, as a PhD student, I will be aiming to develop a new technique (approach) to alter the inhibitory environment of the scar following spinal cord injury (SCI).

SCI is the damage that temporarily or permanently affects the functionality of the spinal cord and generally categorized into traumatic and non-traumatic aetiologies. The former involves a primary insult that causes damage in cells accompanied by secondary injury and gives rise to the death of neurons and glial cells together with ischaemia and inflammation. It is estimated that more than 27 million people worldwide are living with long term disability following a SCI, 90% of which result from trauma and 10 % as a secondary consequence of disease. Unfortunately, the number of patients globally is growing rapidly, giving rise to psychological and economic costs. Hence, our group mission is to develop a new technology enabling spinal cord regeneration.

Let’s have a quick look at traumatic SCI. Traumatic SCI in mammals results in two types of scar formation, the glial scar and fibrotic scar. The fibrotic scar is due to the disruption of the meningeal sheaths which leads to an infiltration of fibroblast-like cells and deposition of dense extracellular matrix (ECM), increasing the rigidity of the environment and create a physical barrier. The fibrotic scar contributes to the failure of axon regeneration while the glial scar is formed from astrocyte processes tightly adherent to each other through tight junctions and are surrounded by ECM (Fig1). The interplay of all molecules within scar tissue is complex and there is a vital role for in vitro research to play in disseminating these events in SCI. 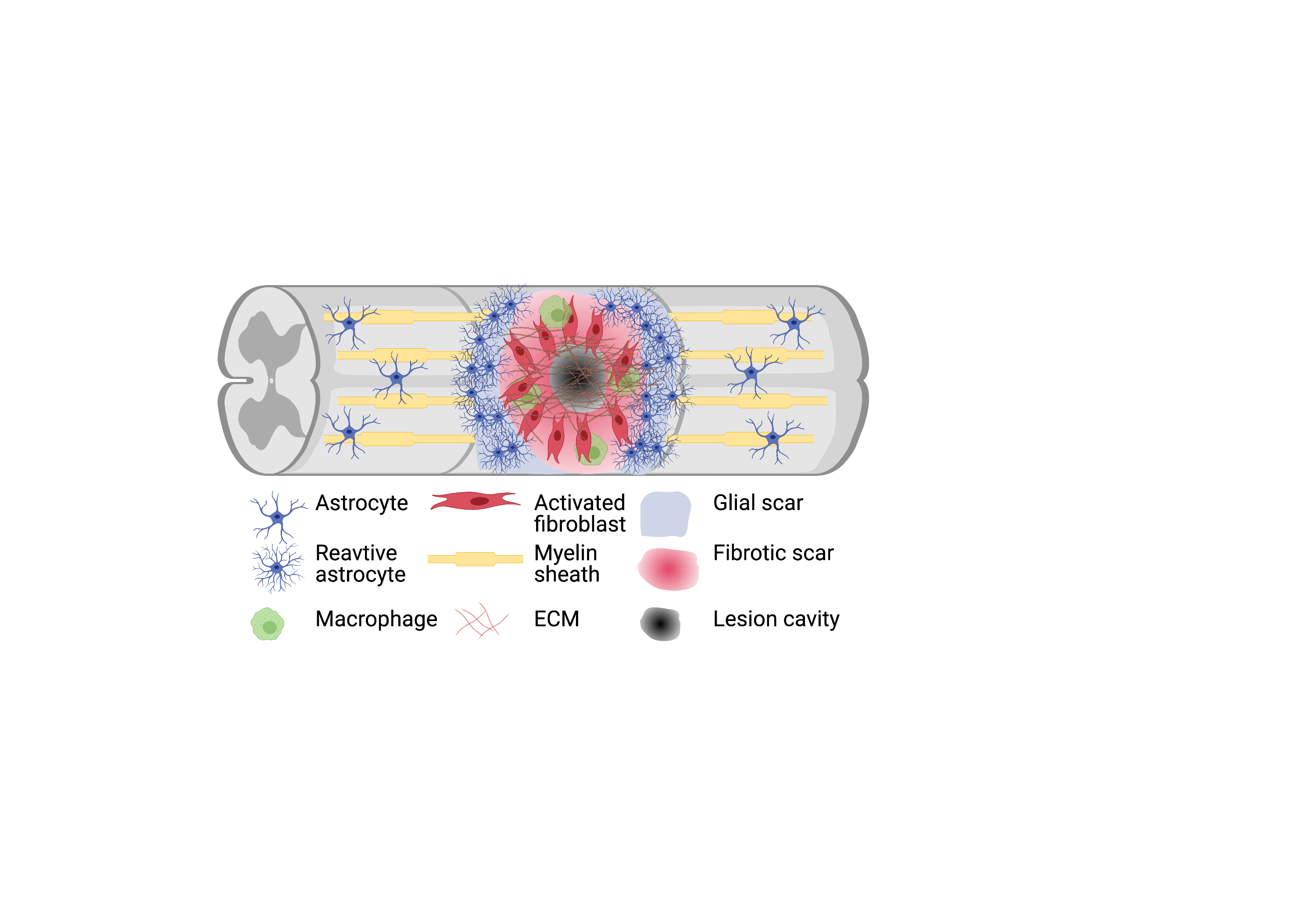 Destabilization or alteration of the structural and chemical compositions of the ECM has a significant impact on migration, communication, and survival of all cells – neural and non-neural – that are critical for spinal cord repair. By altering ECM structure or modifying the ECM functionality to ameliorate the degradative effects of inflammation, an environment that is more conducive to tissue repair and axon plasticity after SCI can be created.

There is a critical need to develop protocols that boost the cell’s ability to produce ECM within in vitro assays. One possible way is to expose cells to an environment crowded with adequate macromolecules to mimic the physiological cellular milieu.

Macromolecular crowding (MMC), a biophysical phenomenon based on the excluded-volume effect, dramatically accelerates and increases tissue-specific ECM deposition during in vitro culture. By blocking a volume that is larger than their actual size MMCs present a cogent diffusion barrier to secreted ECM molecules. In the presence of MMCs, ECM deposition has been evidenced as fast as 48 h in culture (Fig2). 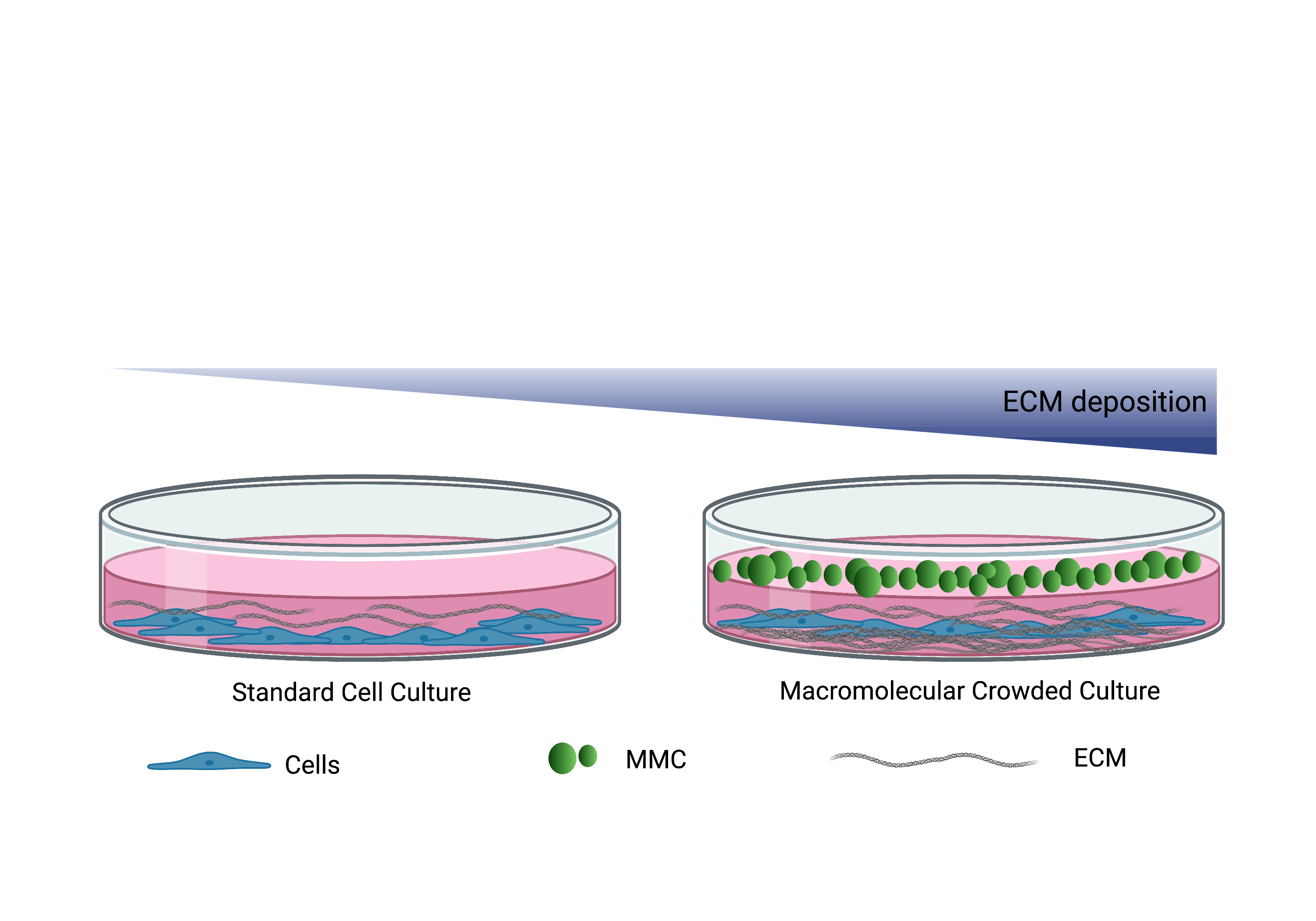 Currently, I have been focusing on MMC which opens new avenues for a more rational design in the engineering of clinically relevant tissue models in vitro. Crowding decreases the rate of diffusion of macromolecules, and this has particular relevance to the glial scar. Indeed, the diffusion barrier served by the scar helps protect surrounding tissue from the locally toxic environment and restrains the insidious spread of secondary injury.

In the next step, I will use a drug that can specifically suppresses fibrotic scar formation in the lesion site and promote axonal regeneration.

A major part of this project will involve the analysis of cell glycosylation that plays a crucial role in many biological processes including cell differentiation, maturation, inflammation and tissue repair. Finally, the incorporation of ECM into a hyaluronic acid (HA) hydrogel will be investigated aiming to reduce scarring and inflammation and promote axonal repair. Indeed, the neuroprotective property of HA makes this gel a useful base substrate in the development of a more complex scaffold.