Inflammation is necessary chaos for survival. Although inflammatory responses provide powerful tools for protection against infectious diseases, the balance between tolerance and rejection is highly important. As this balance breaks, it becomes a driving force for many diseases, including cancer, cardiovascular diseases, and autoimmunity. Among which inflammatory bowel disease (IBD) has been rising in incidence and becoming an emerging epidemic. The prevalence of IBD has been especially high in industrialised and newly industrialized countries causing substantial health-care costs.

IBD is a chronic inflammation of the gastro-intestinal tract which include Crohn’s disease and ulcerative colitis. Contributors to the development of the disease are thought to include environmental factors (stress, diet, smoking) and genetic susceptibility. Due it has not been possible to precisely manipulate simultaneous immunological, physiological, and molecular processes, IBD remains an idiopathic disorder (Figure 1).

Animal models have been extensively used to develop an understanding of the pathophysiology, however, numerous parameters in these systems and significant differences to humans, the results provided poor prediction and failed for the development of efficacious treatments. Alternatively, static in vitro cell culture models have been used to model IBD most of which failed to mimic 3D morphogenesis, self-organization, and differentiation.

To overcome such limitations, microphysiological systems have been developed with microfluidics. Such systems are often referred to as ‘organ-on-a-chip systems. In these models, a microfluidic channel made of an elastic silicone polymer (polydimethylsiloxane) is employed to contain an extracellular matrix on which cells are deposited. Moreover, continuous flow and peristalsis-like motions further enhance the resulting model. From controlling chemical and mechanical cues to cross-talk among cells to evaluate cell-material interactions, microfluidics satisfies crucial requirements for an in vivo-like system. Nonetheless, clinical, and pharmaceutical applications of such models are lacking.

In this project, we aim to develop a close mimicry system that can be used for not only drug discovery and delivery studies but also to map the complex interactions occurring in IBD. For this purpose, the initial aim is to understand the effect of geometry in the bowel. Since the natural microenvironment consists of a tubular structure, understanding the effect of local and overall curvature on intestinal and immune cells will be crucial for the model. Moreover, the human colon experiences continuous mechanical stress caused by bowel movements. Therefore, the second aim is to develop a microfluidic setup that can provide mechanical cues for the system (Figure 2). Further, the 3D microenvironment is another crucial aspect for such a model due to cellular behaviour in 3D systems closely relate to those in in vivo. The third aim, therefore, is to synthesize a hydrogel that will provide the 3D environment. A realistic IBD model requires both intestinal and immune components as well as microbiota. Hence, a co-culture of all parties will be necessary. For this reason, the fourth aim is to develop a method for the system to contain all the cellular players in a controlled manner. Finally, assembling the output of these aims will help us to create a device that can reconstitute the three-dimensional (3D) microenvironment and thus the pathophysiological cross-talk between interacting factors can be recapitulated. Ultimately, the model and the experimental data will allow a more detailed study of the mechanisms of pathology, as well as the development and testing of new drugs, new drug delivery systems and new effective therapeutic approaches. 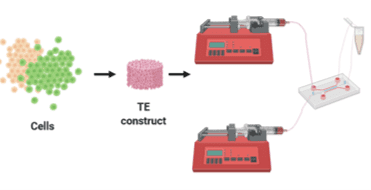