Adipose Organoids: Can Doctor Who help us treat Type 2 Diabetes?

In a 2008 episode of Doctor Who, the 10th Doctor (David Tennant) and his new companion Donna (Catherine Tate) saved the world from an alien diet pill.  This pill caused a person’s fat to literally jump out of their body, forming small white creatures called Adipose (Figure 1).  Although fictitious, these creatures represent a complex multicellular 3D model of human fat, or adipose, tissue and thus illustrate an important question.  Can we develop an adipose organoid in the lab which accurately depicts human biology, and can therefore be used to develop new treatments for Type 2 Diabetes?

FIGURE 1: Adipose Fiction vs. Reality. Left panel: The Adipose aliens featured in a 2008 episode of Doctor Who.  Right Panel: Differentiated SGBS cells forming an adipose-like spheroid in the lab.  Could adipose organoids lead to the development of improved treatments for Type 2 Diabetes? 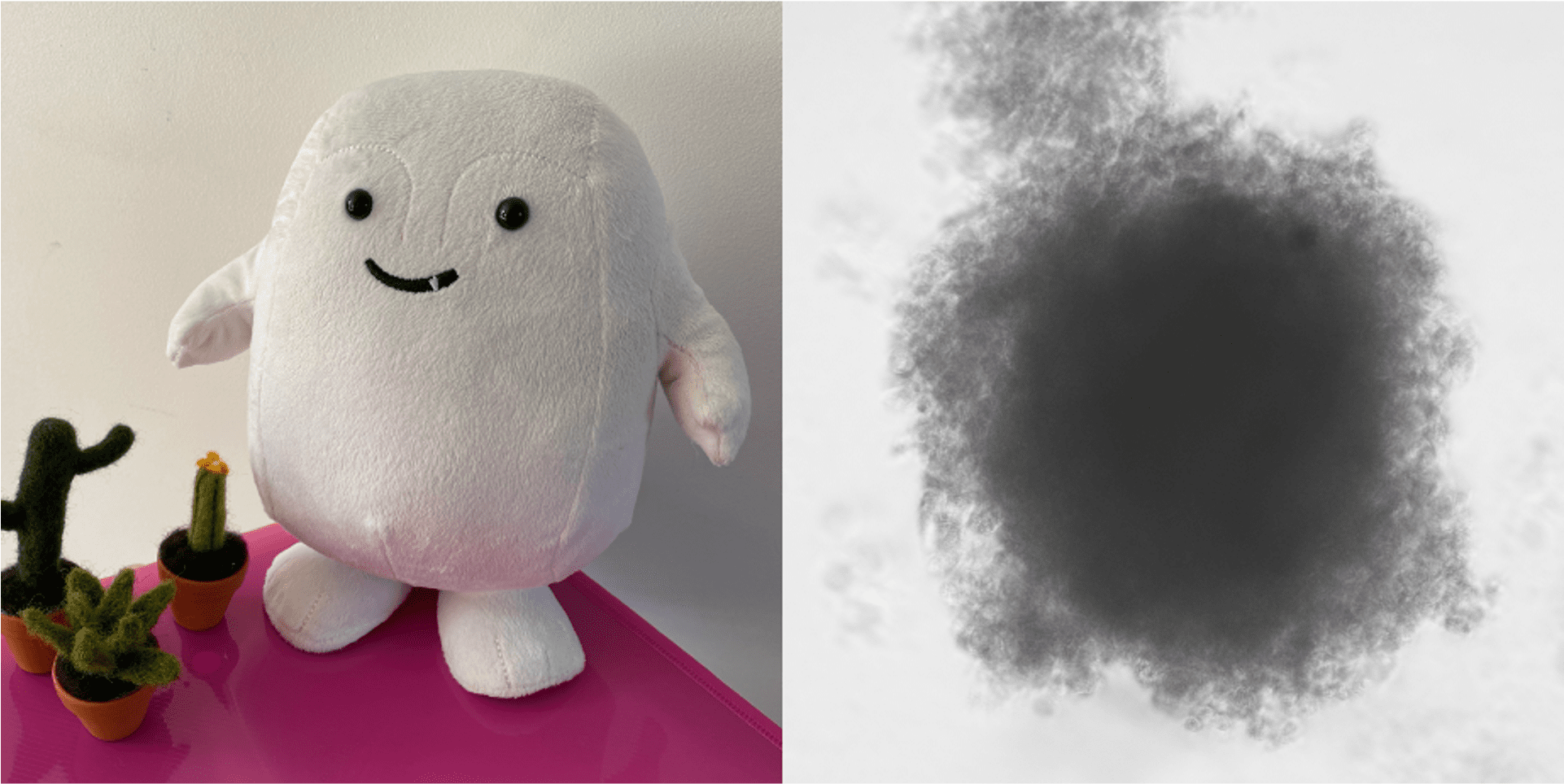 Type 2 Diabetes (T2D) is a life-changing condition caused by the body becoming resistant to  the hormone insulin. This means a person can no longer regulate their blood sugar levels, and if uncontrolled, the resulting hyperglycaemia (increased blood glucose) can lead to severe complications such as heart disease, nerve damage or loss of vision.

Although there are drug treatments available for T2D, the majority of these simply treat the symptoms by reducing blood glucose.  Only one currently approved drug, pioglitazone, actually improves insulin sensitivity, however it also has recognised safety concerns and thus is typically used as a last resort.  There is a clear need for new drug treatments which treat the underlying cause of T2D.

The exact cause of insulin resistance remains unclear, although its development is strongly associated with chronic low-level inflammation of adipose tissue, also seen in obesity.  It is thought that targeting the interaction between the metabolic and immune systems may be a promising opportunity to treat T2D.  However, it has been difficult to develop new insulin-sensitising drugs due to a lack of insulin resistant models suitable for drug screening.

Currently, animal models are often used to research insulin sensitivity. However these are expensive, low throughput and associated with ethical concerns.  In the lab, our current 2D in vitro models are cheap and high throughput, but lack the true complexity needed to study insulin resistance.  There are questions over the relevance of both strategies to human T2D patients, and this is where we come in. 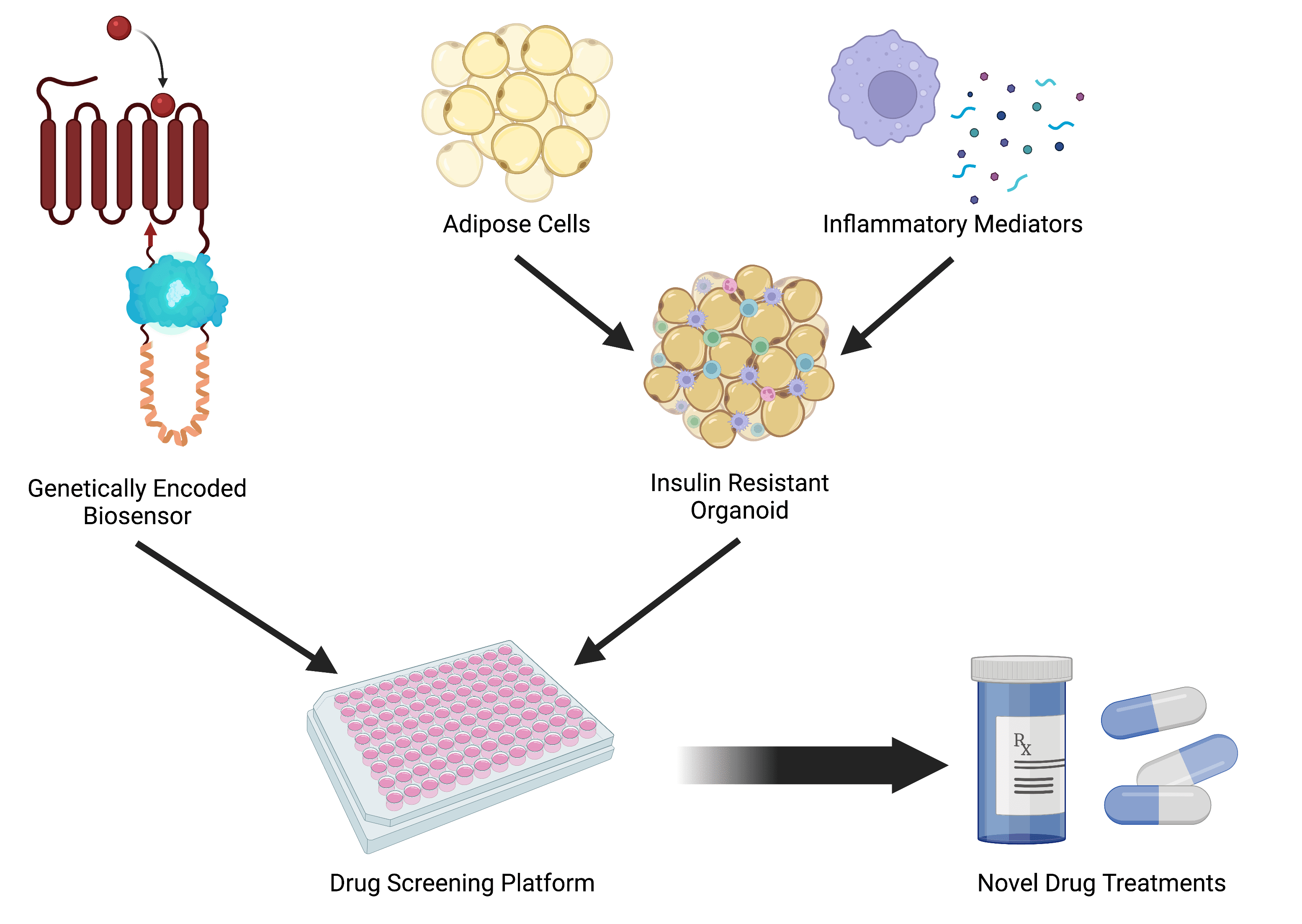 In my PhD, I aim to bioengineer an animal-free 3D adipose organoid which can be used for T2D drug discovery.  To achieve this, I will first develop a 3D model of insulin resistance by combining adipocytes (fat cells) with cells or markers of the immune system.  Unlike the Adipose from Doctor Who, these organoids are microscopic balls of cells and are derived from human cells (without alien interference!).  I will then design and optimise a genetically-encoded biosensor which can provide a real-time measurable readout of function and how this is affected by drug treatment.  Finally, I aim to combine the biosensor with the organoid model to create a drug screening platform which can be used to identify novel insulin-sensitising therapeutics (Figure 2).

The ultimate aim of my project is to develop a platform which can reduce the use of animals in T2D drug discovery.  Therefore, my work is aligned with the principles of Animal Free Research UK to ensure my model is as relevant to human T2D patients as possible. Where possible, my work will not include any animal-derived cell lines, media components or other biomaterials when alternatives are available.

This project therefore presents an exciting opportunity to create an animal-free drug screening platform with the potential to identify novel treatments for Type 2 Diabetes.  Now, about that trip in the TARDIS…