It is now undeniable that mass livestock farming is actively killing our planet. Livestock farming already accounts for more pollution than all forms of transport combined and with global appetites for meat growing, it is only going to get worse.

The environmental impact of livestock farming is now well documented and known to be a significant impediment to the world’s sustainability goals. Livestock farming causes environmental damage leading to global warming in several ways, including deforestation fuelled by intensive land requirements and carbon emissions from ruminant flatulence. The crux of the issue is quite simple, global meat demand is rising and current livestock farming methods are too unsustainable to satisfy them without significant environmental repercussions. This is where the topic of my project comes in: cultured meat (CM), also known as clean, cultivated or lab-grown meat.

Cultured Meat: What is it & why do it?

In short, taking a biopsy from a livestock animal, such as a cow, provides you with stem cells which can be kept alive and grown in a laboratory. These can be grown and then differentiated (matured into different cell types e.g., muscle, fat) to produce meat without needing to kill the animal. 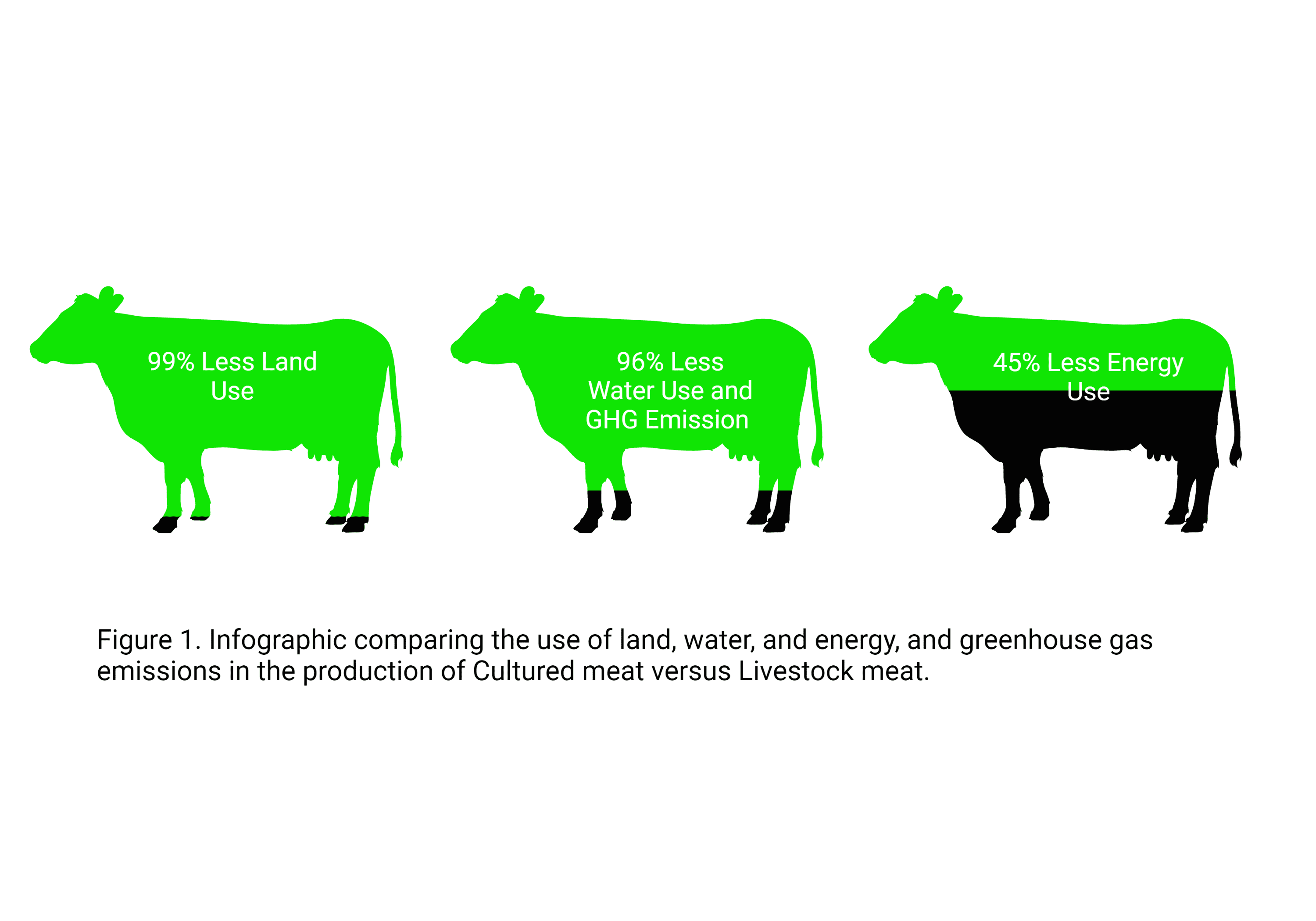 Figure 1. Infographic comparing the use of land, water and energy, and greenhouse gas emissions in the production of Cultured meat versus Livestock meat

This has many potential benefits compared to livestock farming. The matter of sustainability was the area that first drew me to cultured meat, with it giving a 96% reduction of greenhouse gas emission and water usage, a 99% reduction in land usage, a 45% reduction in energy usage. Other advantages such as food security and the highly topical pandemic risk really solidify this as a potentially revolutionary development. CM offers a way of diversifying our food sources. There are many parts of the world which do not have the ability to produce protein rich food, typically meat, as the environment is not suitable for livestock. This can be seen in Central Africa, Antarctica, and Singapore where the weather is too harsh or where there is simply not enough space for the ~2 acres per cow required for livestock farming. CM has even been to space, having been earmarked as a potential protein source for future space missions to Mars! By producing CM in a fully controlled laboratory-like environment, we can ensure that it is free from bacteria, making it safer and ‘cleaner’ than conventional meat and reducing the possibility of people getting ill from eating it. On top of that, we could supplement it with any nutrients that people are deficient in, like vitamins D, B12 and B9, Calcium and Iron, deficiencies which are prolific in the global and UK population. All this, alongside the obvious animal welfare implications of having slaughter-free meat and eliminating the cruelty of industrial farming practices.

CM is a technology which would allow us to not only drastically reduce our environmental impact but also enrich food security, radically improve animal welfare, and maintain our appetite for meat – literally having our burger and eating it!

What Am I Doing About It?

Cultured Meat is happening right now: the first and only commercially available product is a chicken nugget in Singapore which costs an eyewatering $50. Now that we have proven that CM is possible, the focus is making it at low enough cost and at large enough scale to even make a dent in the 6.2 million tonnes of meat the world consumes every week. My work aims at streamlining the process of

making CM and developing new materials and techniques to make production cheaper whilst also improving the properties of the final product. 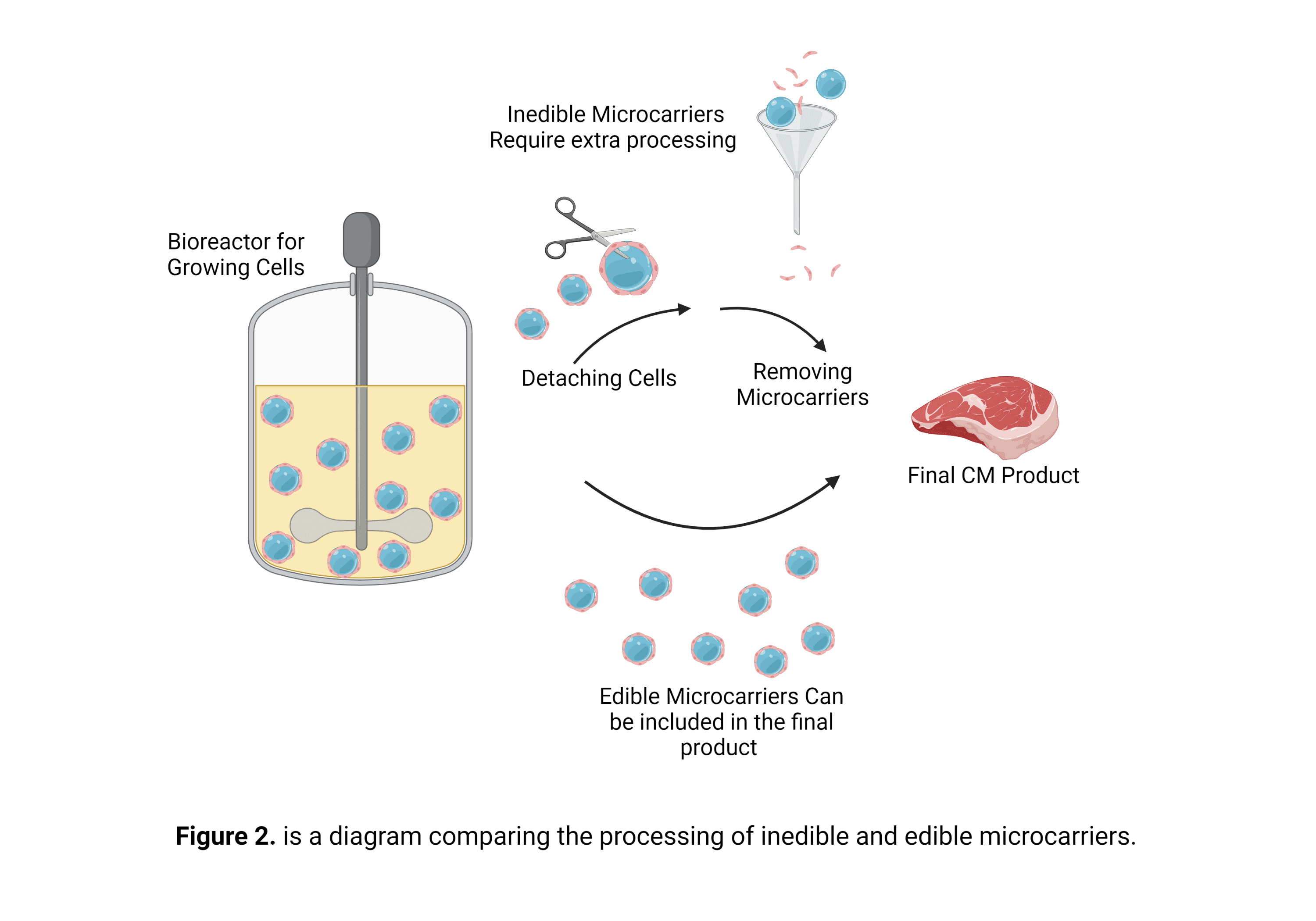 CM is typically made by growing initial starter batches of cells in large containers called Bioreactors. In these containers the cells grow on little beads or microcarriers which get stirred around in liquid culture media which provides them with all the nutrients they need to grow. The first aim of my project is to produce edible microcarriers which would be beneficial in a couple of ways. Traditionally microcarriers have been inedible, so when used in cultured meat production it has been necessary to detach the cells from the microcarriers and the possibility of contaminating a final product with these small inedible particles could cause huge food safety concerns. By creating edible microcarriers these concerns are eliminated, and it can help to simplify the production process. The edible microcarriers could be included in the final product, skipping the cell detachment step which saves time, effort, and money. Another of my aims is to devise a scalable method of growing both muscle and fat cells simultaneously. Fat plays a vital role in meat flavour and texture, so it is only appropriate that this is replicated in CM. Overall, I hope to develop scalable techniques for the co-culture of bovine muscle and fat cells and design a simple and cheap production process to bring CM to your table.

This work is affiliated with University of Birmingham and in partnership with Quest Meat. All figures were created with BioRender.com.