Traditional Chinese Medicine – what do we know about it?

Mysteries all around us

In the age of continuous scientific discoveries when it seems that we understand the world around us better than ever, there are still a lot of unsolved mysteries. One such enigma is an ancient medical practice, one that a lot of people are sceptical about in the modern world of synthetic drugs. That practice is known as Traditional Chinese Medicine (TCM). Despite scepticism, there must be a reason why herbal TCM has survived through thousands of years and is still used nowadays. Let us not forget that a lot of countries other than China have ‘folk remedies’ based on plants growing all around us. You may have previously tried something based on naturally found compounds that was supposed to (and probably did) help with your common cold symptoms.

It might come as a surprise, but quite a few TCM compounds became the basis for drugs we are lucky to have at our disposal nowadays. For example, artemisinin, which has been used to treat fevers for over 2000 years, proved useful against malaria. Another famous herbal TCM is ginseng, which has a plethora of therapeutic effects attributed to it, such as reducing blood sugar and acting as an antioxidant. Herbal TCM therapies cover a great variety of illnesses, but there is often little scientific evidence behind them. This is the main reason for the gap between modern Western medicine and ancient Eastern herbs-based practice.

Where does the drug go?

Herbal therapies are administered orally, which means they work by being digested and absorbed in our digestive system. My project focuses on absorption of therapeutic compounds, as well as interactions between drugs, our cells, and the population of useful microorganisms that live in our gastrointestinal tract, collectively named microbiota. To achieve this goal, I am working on creating a unique system which represents our small intestine. This organ is a major site of absorption thanks to its epithelial tissue made of different cell types carrying out very specific functions, like absorption and mucus secretion. The small intestine also has microbiota, which are crucial for creating a representative biological environment and facilitate molecule metabolism (Kastl Jr. et al., 2020).

Reconstructing organs is no easy feat

Usually, cell-based research involves growing cells on a plastic surface and performing basic tests to see whether cells are living or dying, if there is any change in their biological and chemical characteristics, etc. However, such methods do not closely resemble the structure of the human small intestine. The cells do not feel that they are in their natural environment, and do not carry out the whole range of their functions. This is mainly because those cells do not form the finger-like structures called villi, found in the small intestine (Figure 1). This means that we need to find a better way of recreating small intestine tissue in the laboratory for pharmaceutical (and other) studies.

That is the issue my project is going to tackle in collaboration with China-based company Tianjin Modern Innovative TCM Technology. The primary goal of my project is to establish an organ-on-a-chip system (Figure 2) and apply it to TCM research. I will design a 3D ‘intestine-on-a-chip’, which will function in a very similar way to the real human organ. Moreover, as our intestines are constantly moving to facilitate the transport of food we consume, my 3D model will also account for the mechanics behind that movement and recreate the mechanical stimulation of the intestinal cells on the chip. 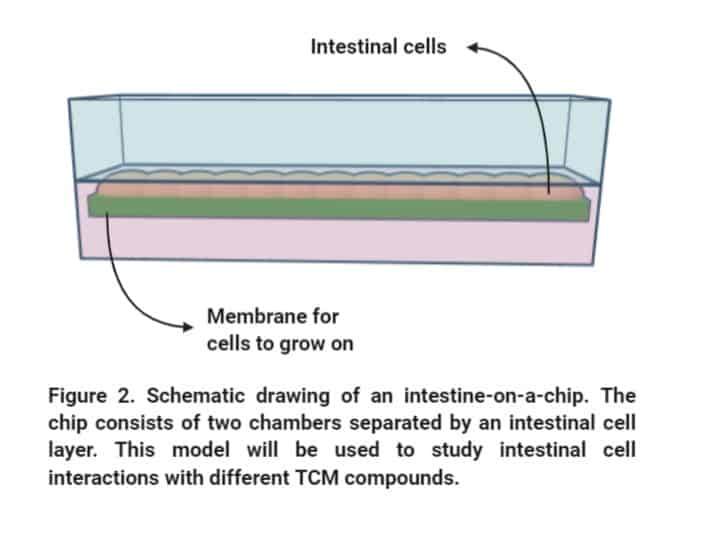 Now I hear you asking ‘How is this useful?’ First of all, this system can be applied to any research on the human small intestine that you can imagine. It will be so versatile that you could study diseases like Inflammatory Bowel Disorder, use the system for food industry testing, and apply it to pharmaceutical studies. You could even use such intestine-on-a-chip to research the gut-brain axis – the study of how the microbes that live in our digestive system could influence our mental health (microbes causing depression can turn out to be a very real thing!). Secondly, this is novel research on TCM. If we can find scientific evidence for some types of TCM it will open doors to many new therapies, potentially with fewer side effects than some current drugs. In addition, establishing a versatile platform means taking a step towards personalised medicine while taking into account individuals’ unique intestinal microbiota. To sum up, my project can lead to a lot of new opportunities and developments in research, as well as potentially help patients in the UK and around the world, and that is what bioengineering research is all about.