From a 3D perspective: AML and the bone marrow niche

Acute myeloid leukaemia (AML) is a malignancy of the blood, caused by a build-up of genetic mutations, which can lead to a lack of mature blood cells in the bloodstream. Current AML research includes the use of small animal models and 2D cell culture systems. Whilst these are robust systems, both have their pitfalls. 2D cell culture and small animal models display several differences compared to the human body, not to mention the ethical issues surrounding the use of animals in research. Could novel 3D models be the path to a more accurate, and therefore more successful, research approach? 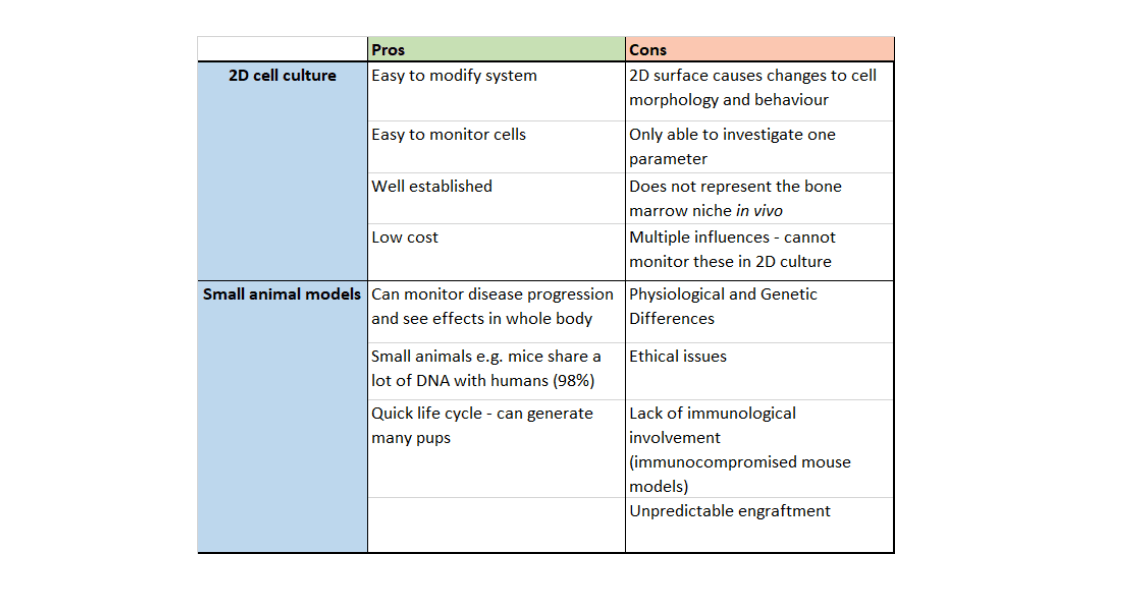 Bone is a rigid organ that provides structural support for the body. Cortical (hard) bone comprises approximately 80% of bone tissue, whilst 20% of bone tissue is spongy. Bone tissue is highly vascularised, meaning there is a lot of blood vessels to deliver oxygen and nutrients to its cells.

Red bone marrow consists of many cell types including fat cells, bone-forming cells (osteoblasts) and soft tissue forming fibroblasts. Stem cells also reside in the bone marrow: mesenchymal stem cells (MSCs), which can differentiate into bone, cartilage, ligament, tendon and fat; and haematopoietic stem cells (HSCs), which can differentiate into the different blood cell types. The fate of these cells is affected by signals from bone marrow cells and other cells in the body such as immune cells.

In acute myloid leukaemia (AML), mutations arising in the HSPCs result in transformed leukaemic stem cells (LSCs), with higher proliferation capacity. Leukaemic cells are produced instead of healthy myeloid cells, and are released into the bloodstream. These outcompete the healthy blood cells, which can cause bone marrow failure and death. Remodelling of the bone marrow niche by the leukaemia cells helps LSCs to survive and circumvent treatment.

Current treatments include stem cell transplants, chemotherapy or targeted therapies such as midostaurin. However, AML incidence increases with age (median age at diagnosis is 67), meaning many patients have other underlying conditions making them unsuitable for stem cell transplant, or unable to tolerate chemotherapy. Researchers are now developing AML treatments that are targeted, more effective and less toxic.

Potential drug candidates include cyclin dependent kinase (CDK) inhibitors. CDKs are essential proteins in the cell cycle, an important process involved in cell proliferation. Cell cycle-inhibiting drugs affect cancerous cells more than healthy cells because cancer cells proliferate/grow faster. This makes them more sensitive to substances which cause cell cycle arrest, causing malignant cell death. However, LSCs within the endosteal niche are often dormant, which means they do not divide as quickly as other cancer cells. Drugs may be less effective on dormant LSCs, causing AML relapse. CYC065 is a potent dual CDK inhibitor currently in clinical trials by Cyclacel. This drug has been considered for use in a variety of cancers, including AML, acute lymphocytic leukaemia and chronic lymphocytic leukaemia. Here, it will be used in combination with selected chemotherapy drugs to assess the effect of the bone marrow niche on AML cells.

Therefore, the hypothesis of my project is that developing a biomimetic 3D model will provide more insight into the interaction between LSCs and the bone marrow stroma compared to 2D systems. The aim of my project is to develop an accurate 3D model of the bone marrow microenvironment in order to study LSCs behaviour and their response to CYC065 treatment, with the hope of improving treatment for AML patients in the future.

The 3D model will build upon previous research completed using spheroids growing within hydrogels. Hydrogels consist of hydrophilic (water-attracted) polymers which are crosslinked to create networks of polymeric chains. These networks can contain a high level of water, making them similar to the human body environment. Balls of stromal cells, called spheroids, can mimic the bone marrow stroma. To make the model more realistic, I will modify the 3D system to reflect the conditions of the endosteal niche by reducing oxygen levels within the 3D model, as well as establishing cytokine gradients and nutrient gradients (the endosteal niche is less nutrient-rich than the vascular niche). Then, AML cells and CYC065 will be added to the model system to compare the effect of the drug in 3D and 2D cell culture systems.

In my opinion, 3D models may have an advantage over current research techniques as they could be a more accurate depiction of the body’s internal environment. This would improve the quality of research, thus guiding us to a successful AML treatment sooner. Additionally, protecting the welfare of animals in research is highly important, therefore the 3R (Replacement, Reduction and Refinement) principles must be followed.  Animal Free Research UK, who are supporting my project in addition to Cyclacel, fund research projects which utilise animal-free technologies, in order to decrease the number of animals used in research. 3D models provide an excellent opportunity to reduce the use of animals in scientific research. 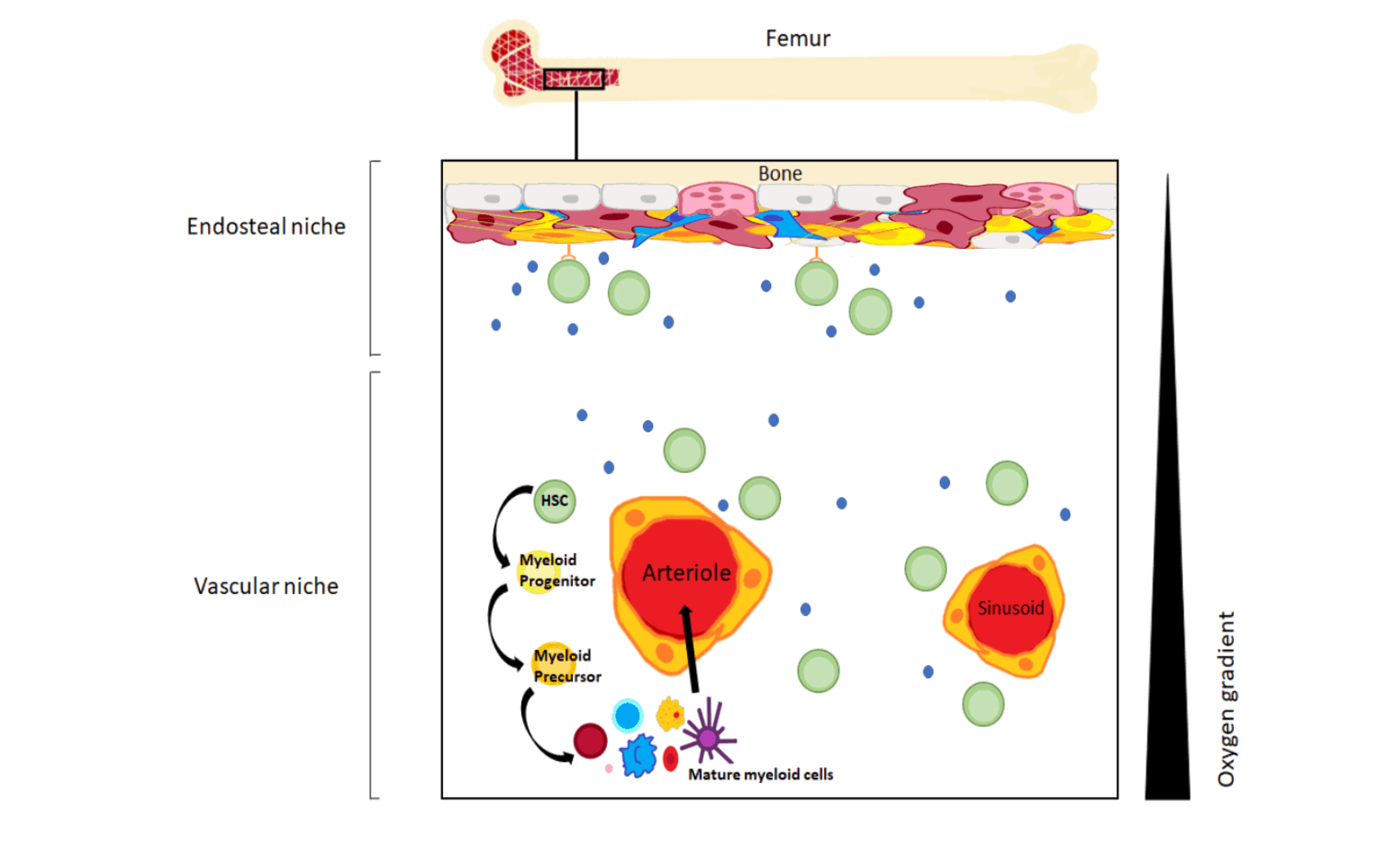 Figure 2: Hydrogels, spheroids and the 3D niche model. Top left: a hydrogel with a zoomed in portion displaying the structure. Wavy line: polymer; blue dot: cross-link between the polymers. Top right: a spheroid. These can be made with MSCs or other bone marrow cells. Middle: spheroid encased in a hydrogel. Bottom: a spheroid encased within a hydrogel, with AML cells added. 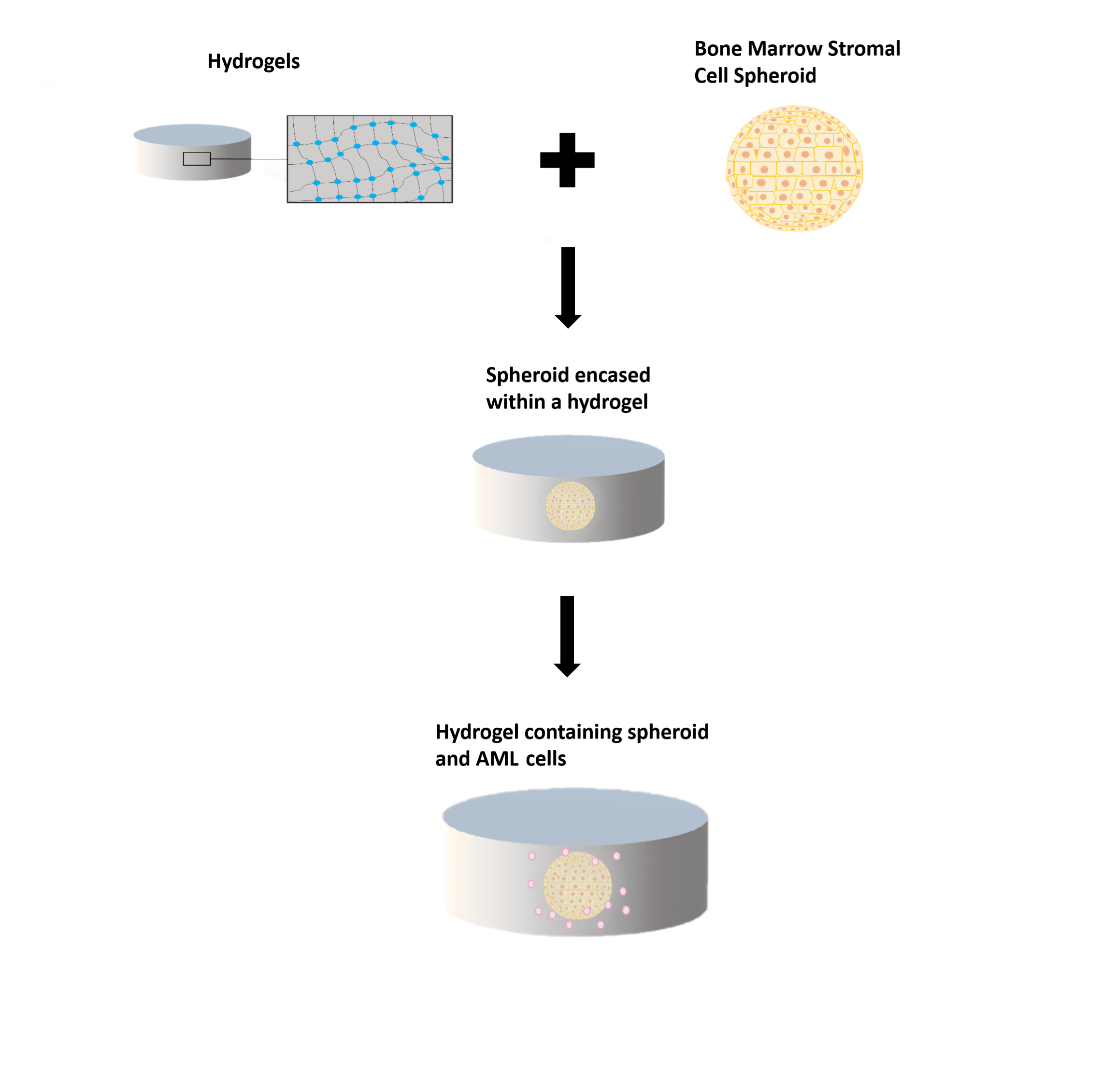