Stem cells are highly valuable in regenerative therapies because of their ability to change into several cell types. For example, mesenchymal stem cells can change into bone, cartilage or fat. When stem cells were first discovered it was thought that all the cells were identical, and all will change into the same cell type in treatments. However, it is currently understood that stem cell behaviour is not so simple; individual cells have predetermined preferences for which cell type they will change into. As a result, current regenerative therapies have had inconsistencies and inefficiencies because it is not known how many cells in a dose will engraft onto the desired area of the body and change into the cell type that is required.

Populations of stem cells consists of groups for cells that prefer bone, muscle, and cartilage. With each group having different physical properties, including cell size and stiffness, that hint towards their preferred cell type. The question remains that if these groups can be separated to make current therapies more efficient by providing more targeted relief, e.g., by ensuring the stem cells that prefer changing into bone are only used for bone therapy treatments.

In this project, we aim to improve the efficiency of stem cell therapies by making a device capable of sorting the cells with predetermined characteristics into groups by probing their properties, followed by placing individual cells in droplets, and then sorting the droplets into groups based on the cells they contain.

We will use the powerful technology of microfluidic devices because of the ability to manipulate small volumes of fluids and material. The devices contain a labyrinth of tiny channels (which are the width of a single human hair) that can be uniquely designed to perform specific tasks. However, using this technology will require the stem cells to be tested in a fluid.

There are many ways to probe a cell with microfluidics, such as separation based on size by using rows of pillars that act similarly to a filter. Fluid guides the cells through the device and forces interactions with the pillars. The pillars are arranged to direct all the cells in an overall direction, but smaller cells can flow between the pillars and be diverted away from the main flow. Whereas larger cells remain mostly unaffected and remain with the overall flow direction, thereby separating the cells by their size.

It is also useful to test the elastic properties of cells by deforming them, for example, micro-constrictions are used to dramatically shrink the width of a channel in places so that a circular cell will have to deform and elongate to fit through the channel. Optical tweezers can also be applied to deform the cells with light. Optical fibres can be placed either side of a channel for laser light to trap and elongate the cells as they flow between the fibres. The amount of deformation or elongation helps indicate the cell’s elastic properties.

After the size separation and elasticity testing, the cells can be captured inside droplets in order to separate the cells into sub-populations.

To produce droplets, the channels can intersect to force two different fluids to interact. It is important to use fluids that don’t mix such as water and oil so that the droplets are maintained and do not merge together. Identical droplets are made by having a continuous flow of oil though a channel and a steady flow of water to intersect the oil channel. Drops of water are regularly cut-off by the flow of the oil, which is an incredibly fast process that has the capability of making thousands of droplets per second. Cells are captured naturally by putting them in the water-based fluid so that a single droplet contains a single cell.

Droplets are extremely useful because they can be individually controlled and manipulated, this is a useful property for sorting where droplets are separated into groups by individually directing them towards different channels. For example, acoustic waves can ‘kick’ particular droplets in different directions and channels for separation. By using the signals from the probing stages, the acoustic waves can be triggered to ‘kick’ the droplets that contain cells with bone, muscle, and cartilage preferences in different directions towards separate channels. Therefore, sorting the cells into distinct groups.

This project presents an exciting opportunity for improving regenerative therapies by separating a population of mesenchymal stem cells into separate groups that prefer to change into bone, muscle, and cartilage. As a result, the work will provide an important step towards improving the effectiveness of regenerative therapies by ensuring the cells are targeted towards treatments. Potential also exists to enhance future research by allowing researchers to isolate stem cells with desired properties. 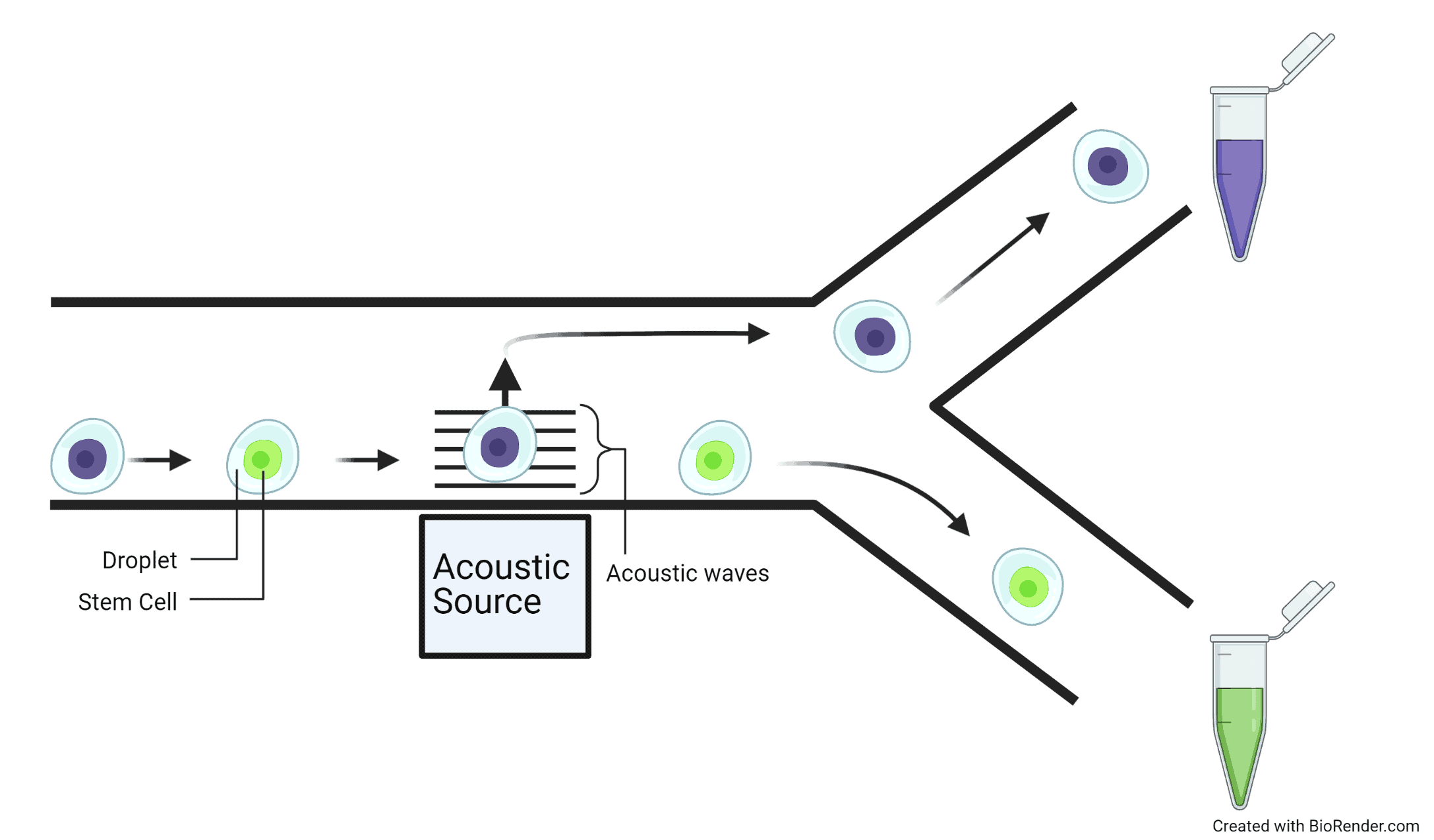