During my PhD I will investigate the use of synthetic gels as a platform to grow and experiment on blood stem cells. The aim is to better understand the bone marrow (BM) niche where these cells reside, and search for causes and treatments of BM-related disorders such as leukaemia.

Healthy blood or haematopoietic stem cells (HSCs) are responsible for the continuous production of blood and immune cells throughout a person’s life. However, these cells are also thought to cause various disorders, such as leukaemia, as a result of genetic mutations and changes to their environment. Research into causes and treatments for these disorders is hampered by the fact that HSCs rapidly differentiate when they are removed from the BM niche, becoming normal blood and immune cells that can’t be used for this research.

During my PhD at the Centre for the Cellular Microenvoronment at the University of Glasgow, I will develop technologies to overcome this hurdle, using gels to mimic the BM niche in the lab. Already, our group has developed a system capable of maintaining HSCs in the lab for a few weeks, offering a potential avenue for future facile HSC research. This system used bone stem cells, which co-exist with the HSCs in the BM niche and are thought to produce proteins which support the HSCs, as well as soft, animal-derived collagen gels to mimic the BM niche mechanically.

While this system worked, we are attempting to improve on it by replacing the collagen gel with a synthetic, peptide-based gel. This system would use no animal-derived products and have no batch-to-batch variability in the gel’s contents, both of which would be improvements on the previous collagen gel-based system. In addition, the synthetic gel is highly tuneable, allowing this system to be optimised for various applications.

One potential application is the expansion of HSCs. HSCs are used for research and medical treatments, including BM transplants. However, due to their rapid differentiation, HSCs are in short supply and currently BM transplants are strictly one donor to one recipient. If the synthetic gel system under development can maintain HSCs by mimicking the BM niche, then it should be possible to optimise it for expansion of HSCs, which occurs frequently in the native BM niche. This would help meet the demand for HSCs, aiding related research and treatment.

Further, I plan to optimise this system to support HSCs, allowing them to be genetically edited using CRISPR. CRISPR is an effective gene editing technology based on the anti-viral immune response of bacteria. If successful, this work could have huge ramifications for our understanding of the BM niche and treatment of associated disorders, allowing the genetic causes of various features and defects seen in HSCs to be investigated. This system could also allow gene editing therapies for HSC disorders such as leukaemia to be developed. 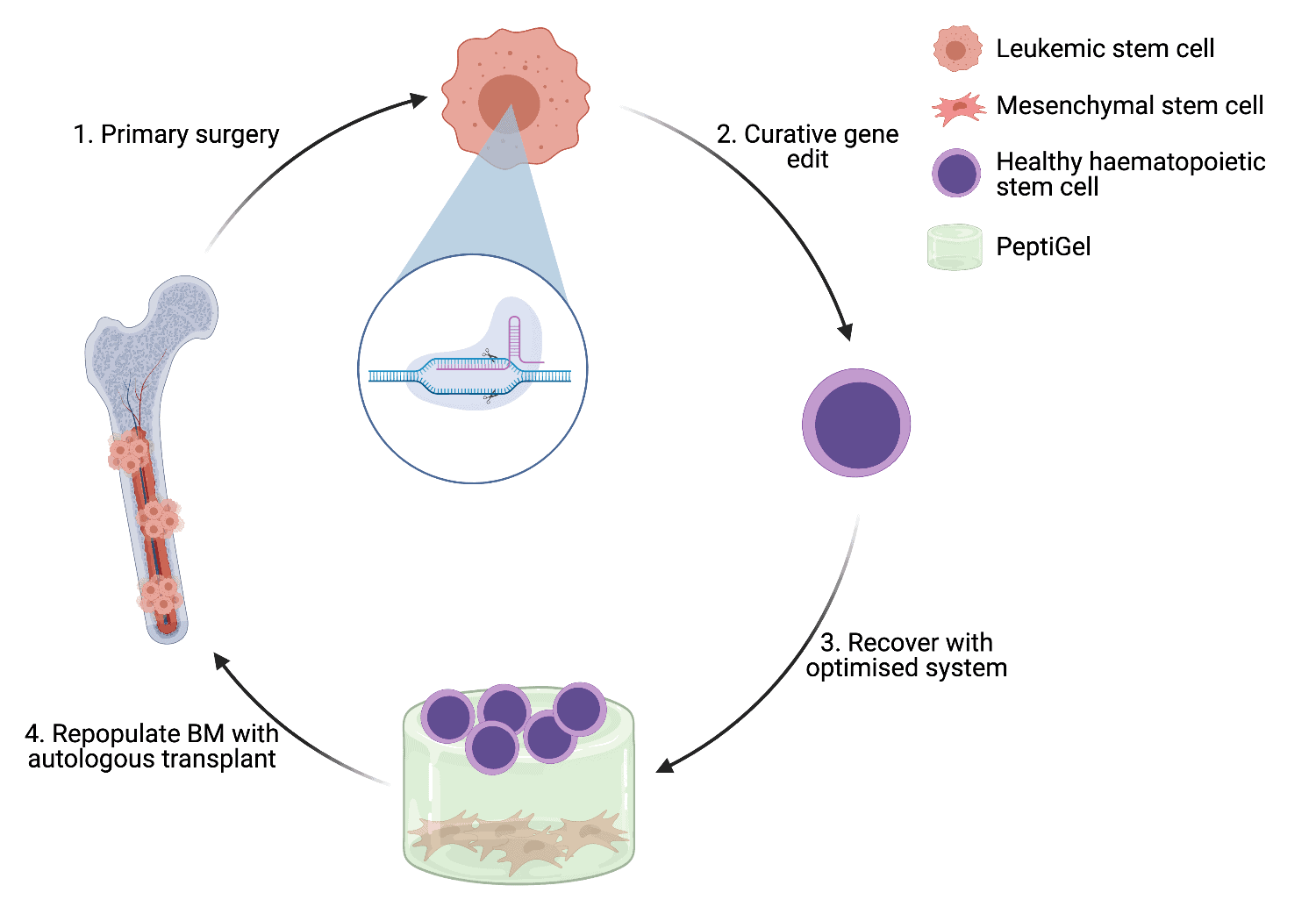 Our work has the potential to radically improve our understanding of the BM niche, one of the most enigmatic organs in our bodies, using simple gel-based systems. In addition, if the ambition of developing a system able to facilitate HSC gene editing can be realised, it will bring us one step closer to understanding and curing BM diseases such as leukaemia.