The population of Haematopoietic Stem Cells (HSCs) present at birth will be responsible for repopulating the body with all blood and immune cells until death. If someone is dealt a bad hand and their HSCs are damaged or mutate, this can result in many blood disorders like leukaemia or sickle cell anaemia. Methods of curing these diseases require HSC’s for either the testing of drugs and treatments, or physically replacing faulty HSCs with those from someone else, known as a stem cell transplant (SCT).

The availability of primary HSCs is limited, and the chance of those available being a biological match to a patient needing an SCT is low. Additionally, SCT is a hugely invasive procedure, incredibly expensive and usually a last resort in a treatment plan. The alternative is to treat the cells themselves, and for drug testing there’s no biological match needed, just the question of accessibility. But how many cells are needed for tests during the drug discovery for just one drug? Drugs which, after years of pre-clinical development enter clinical trials with only a 10% chance to make it to market? A lot. A lot of cells that are now not available for SCT and potentially resulting in the death of patients.

HSCs are difficult to obtain because in 2D cultures they lose their ‘stemness’; they lose their ability to become dormant for longevity and self-renew for population maintenance, and instead differentiate. Granted we want some to do this, but in the body a percentage of the population always remain in their most primitive state, they don’t all wander off down a differentiation pathway that leads to mature cell types. Therefore, we want an environment in vitro that sustains this most primitive group, else the cells being tested on, or transplanted, aren’t really stem cells…. not much use!

This is where I come in. The project I am undertaking stems (pun intended) from this issue; how can we make primary HSCs more accessible? Firstly, I intend to form a 3D model of the most common place for HSCs to reside – the bone marrow (BM) microenvironment coined the ‘BM Niche’. The aim of any in vitro model is to replicate an environment in vivo as accurately as possible. In the case of the bone marrow, it has been shown that marrow HSCs can be sustained for weeks utilising a hydrogel scaffold to mimic the physical features of the niche, while biological additives such as extracellular matrix proteins (ECM), growth factors and cellular co-culture with marrow Mesenchymal Stem Cells (MSCs) mimic the chemical features. 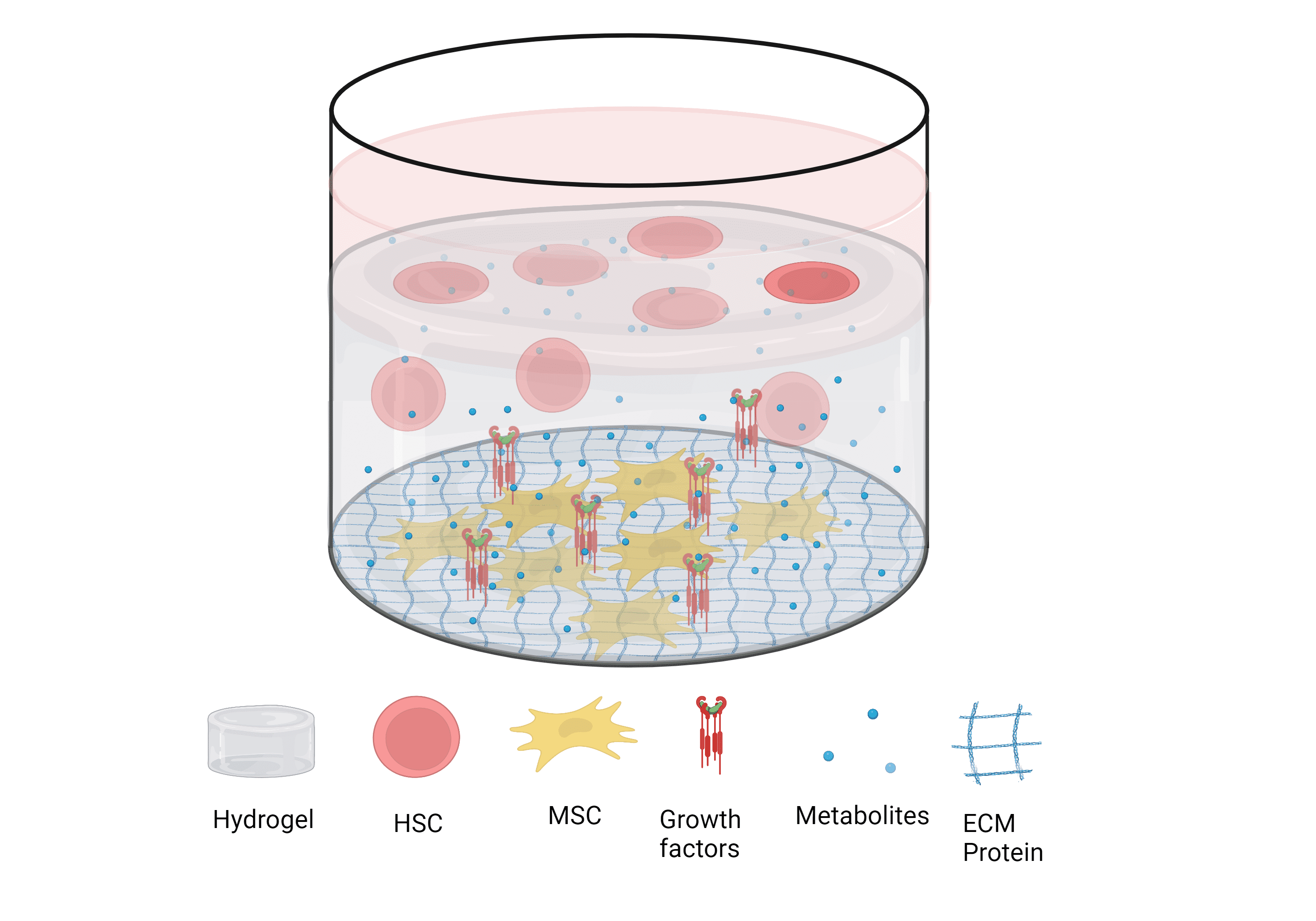 Secondly, I’ll determine if the influence of MSCs on HSC self-renewal is a result of metabolomic affects. If it is, I’ll isolate these metabolites and introduce them artificially to the model and hope these metabolomic affects mitigate the need for other biological additives, subsequently simplifying the current techniques used to form niche models. I’ll also aim to use MSC spheroids due to their enhanced viability and phenotype retention long-term.
Lastly, I’ll look to develop a high throughput method of manufacturing these simplified niche models with Atelerix, my industrial partner, alginate gels that enable prolonged cell-survival at room temperature. This will enable the niche to survive storage and transit, arriving to customers in a ready-to-use form. 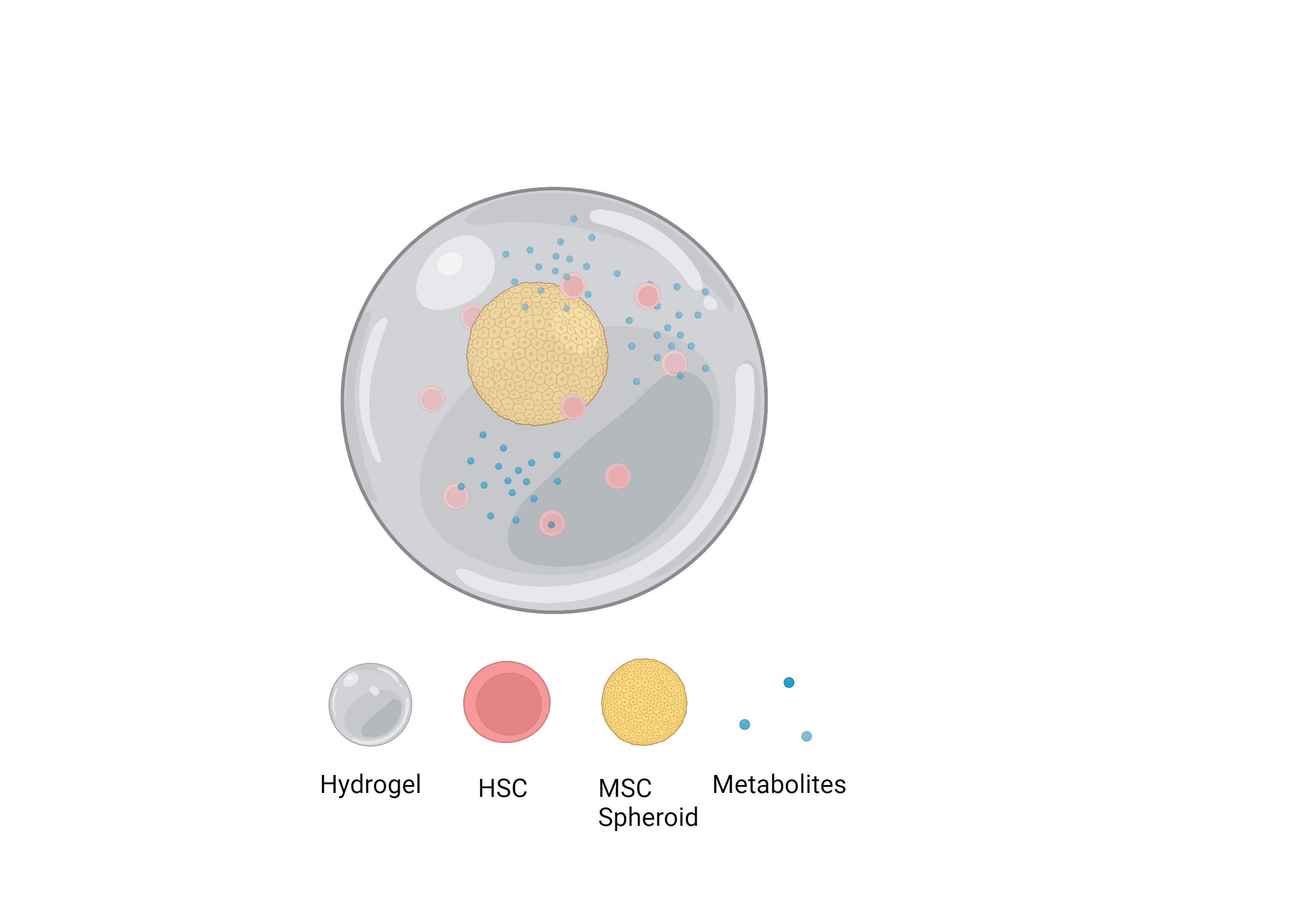 In summary, haematopoietic disorders lack in treatments due to the cost and poor availability of primary HSCs. This project should yield a single niche model to grow and expand HSC samples without loss of stemness that can retain viability for extended periods of time outside traditional in vitro cell culture environments.  This will improve the availability of HSCs and in turn should greatly enhance the development of treatments for blood disorders and reduce the cost of stem cell treatments.