Stretching the possibilities: development of a resilin-based hydrogel for tissue engineering.

Biomaterials have been extensively employed in drug discovery and regenerative medicine to better mimic the three-dimensional nature of the extracellular matrix (ECM). Hydrogels are an optimal choice because they form a mesh-like structure that biomolecules can be trapped in, creating an environment favourable to cell growth (shown in Fig 1.). 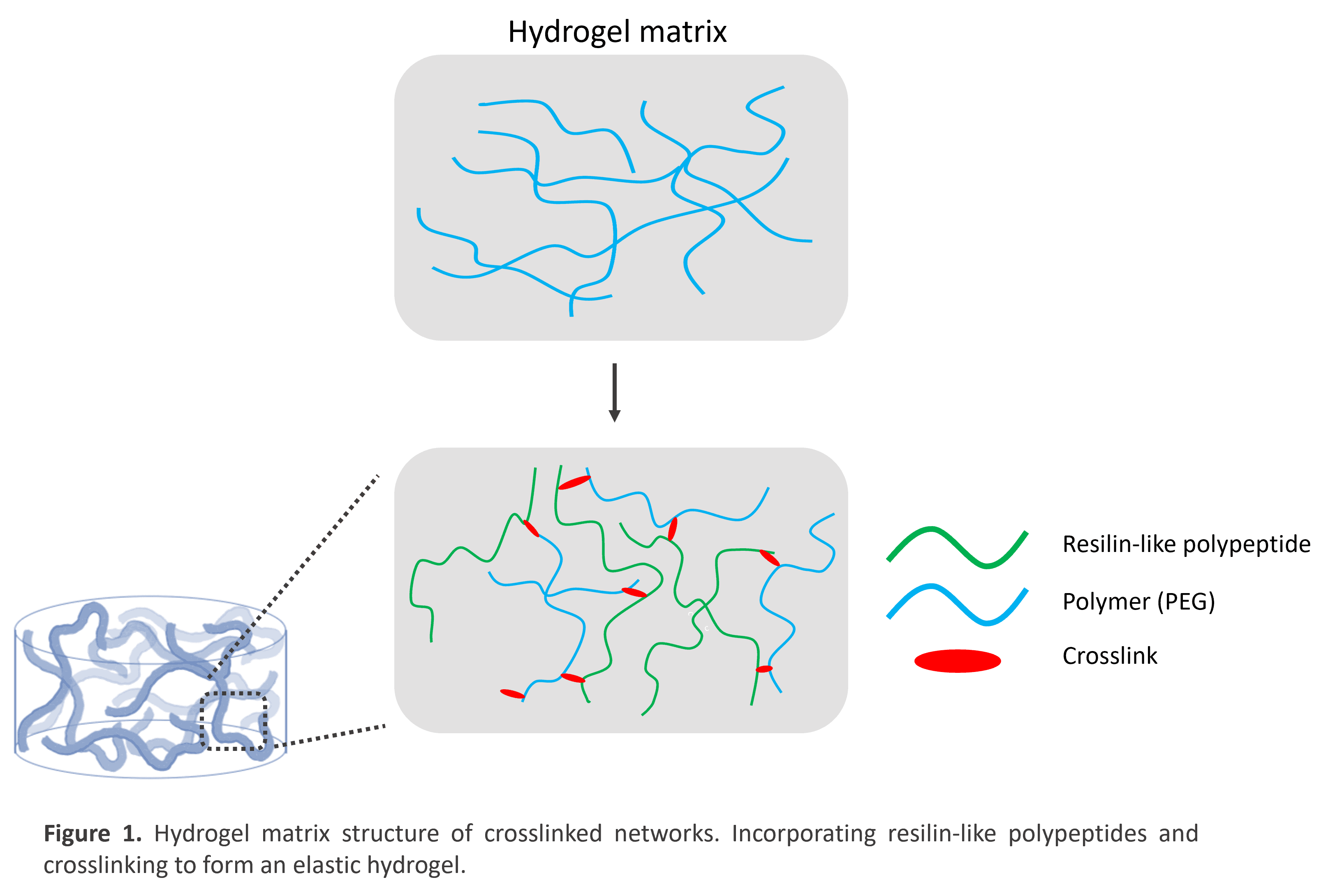 Countless studies have shown that the elasticity of the material surrounding cells during growth has an influential role in controlling their behaviour. For example, growing stem cells in a softer gel will drive them to differentiate into fat-like cells, while growing them in a harder gel will cause them to become more bone-like. Therefore, it is important we develop a larger arsenal of hydrogels with varying and tunable elastic properties that we can use to control cell growth in both in vitro cultures, and potential implants for regenerative medicine.

Nothing can beat a million years’ worth of research and development – we can never truly recreate the amazing mechanical properties of native ECM. But we can take inspiration, incorporating peptides found in the ECM to instil tunable properties. Other have sought to do this by introducing elastomeric peptides derived from proteins such as elastin to generate elastic properties. In my work, I will explore the use of elastomeric peptides derived from a non-mammalian protein – resilin – to develop hydrogels with higher resilience and elastic potential. Resilin is found in the connective tissues of insects – with remarkably high resilience and a tunable range of physical properties, it truly is the bee’s knees. Despite this, it remains a largely under-explored class of biomolecule. Others have developed resilin-based hydrogels by crosslinking resilin-like polypeptides with polymers, however, these fail to mimic the matrix structure of natural resilin (Shown in Fig. 1).

Therefore, the aim of my project is to generate a hydrogel made from a block copolymer using short resilin-derived peptides and covalently attaching them to polymers, leaving only one constituent to crosslink together. As seen in Fig. 2, resilin-derived peptides are synthesised using solid-phase peptide synthesis and conjugated the polymers covalently forming these copolymers with elastic properties. Crosslinking will be introduced photochemically, for example using visible light activation via carbon nitride, or by forming dityrosine bonds as in native resilin to form a hydrogel. The variable crosslinking approaches combined with the elastic resilin peptides should result in a material with a broad range of mechanical properties, each able to be tuned individually. The peptide/polymer hybrid aspect of the material will ensure the network topology is more akin to that of native resilin hydrogels which should instil those similar mechanical properties. The hydrogels will be made biocompatible by incorporating adhesion peptides into the matrix, allowing cells to bind. Work will then be done to identify the relationship between the matrix structure and mechanical properties and evaluate how these can be tailored to alter cell behaviour.

The project will give rise to new tunable elastic hydrogels with potential use as a bioink. More complex and intricate cell-laden structures could be fabricated using a bioprinting using these materials. Taking advantage of the potential to crosslink the gels using visible light and the resilience of the resilin-based structures might help overcome lower resolution extrusion bioprinting. These cell-laden structures could have possible applications in research seeking to better understand how changing the elasticity of the ECM drives cell differentiation or contributes to disease development. Given the potential strength and tunable properties of the material, there might be other possible applications in regenerative medicine, such as an implant in joints and spine.